I’m sure you’re all eagerly awaiting the conclusion of the story, where I write out the full equation for the wave function of proto-helium, that mythical atom consisting of two electrons and a fractional nuclear charge, which is just marginally stable with regard to loss of the second electron. At the same time, I can almost hear the naysayers scoffing at me, because I’ve heard it before: “So what!! Who cares if you can calculate the wave function of an atom that doesn’t even exist. Don’t you know there is no such thing as nine-tenths of a proton?”

I know that’s what people are saying because people have said that kind of thing to me all my life. Well, I’m going to give the scoffers more ammunition today because I’m not going to write out any more mathematical equations than I’ve already written. The fact is, I don’t know what the radial portion of the function looks like because I haven’t actually solved for it: to which I’m sure the scoffers will howl out gleefully: “Then you have nothing!!!”. Well, let my readers be the judge of that. I have the angular part of the function, which I think is still more than nothing. The question is: have I got it right?

When I solved for the two-electron potential well, I did it by taking the simple product function solution and adding a bit of second harmonic. I added it with opposite phases to electrons A and B, which had the net effect of pushing the charge distributions a little bit apart. This was the graph of the two wave functions: 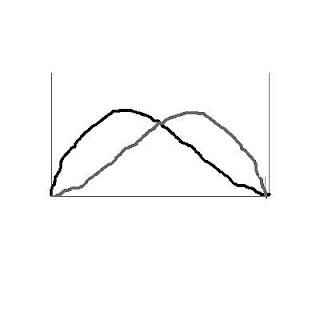 The problem with this is that it ignores the whole business of the indistinguishability of individual charges, which brings about the need to symmetrize your wave function. What I have sketched so far is equivalent to a simple product function, and it can’t be right because it’s not antisymmetric with respect to exchange of particles, as must be the case for Fermions. The symmetrization for this very simple case turns out to be surprisingly complicated especially once you include the effects of spin, and it looks like this, as I explained in my post from last year, "The Two-Electron Well Revisited". 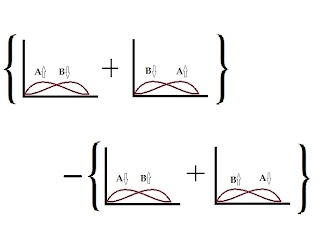 The nice thing about simple product functions is that they retain a certain degree of physical reality that gets lost when we make the transition into six-dimensional phase space. If we look back at the one-dimensional potential well, we can see that all the real physics, from a descriptive point of view, takes place in the very first iteration of the solution, when we simply allowed the two charges to push each other a little bit apart. Proto-helium is very much the same: we have regular helium, where the electrons are almost on top of each other; and as we weaken the central attraction of the nucleus, the charges tend to move apart, until in the limiting case, their angular distribution follows this marvelous function which I would like to name after myself: but since there is already a Green’s Function, I’m going to call this one “Marty’s Function”:

In proto-helium, the angular distribtuion of the first electron is given by this function, and the second electron gets the same function except turned upside down. So one electron leans towards the northern hemisphere, the other one towards the southern. You then just take the simple product of those two functions. The marvellous thing is that if you carefully examine the distribution of charge and spin, you get a perfectly uniform charge distribution over the surface of the sphere, and the spin vector points everywhere radially outwards. So the function is spherically symmetric.

But we're not done yet. Just like the two-electron well, we haven't properly symmetrized the function with respect to exchange of electrons. And just like the two-electron well, the full solution will be the sum of four simple-product functions identical to the one we've already described, except with spins this way and that. But the essential physics is to be found in the description we've already made so far.