How do you guess the solution of an equation?

The most important thing in guessing the solution to an equation is to start with the right equation. The problem with the helium atom is that it's not the right place to start. It only dawned on me gradually, after I derived the approximate solution for the isoelectronic series of helium, that the helium atom wasn't the essential case. It's actually the limiting cases we should look at first.

Yesterday I talked about the limit of high Z, or high nuclear charge. For atoms like uranium and beyond, the solution for the wave function is basically the scaled-down version of the hydrogen atom, with the two electrons in a simple product state. This approximation becomes exact as Z approaches infinity.

What about the other limit, the low-Z case? You think the series starts with helium, where Z=2, but that's not right: hydrogen also has a stable negative ion, with Z=1. Is that the lower limit? Not quite. The hydrogen negative ion is just slightly stable with regard to dissociation, by about 3/4 of an electron volt. (Compare this to the binding energy of atomic hydrogen, at 13.6 eV.) No, the lower limit is actually a very peculiar case. It's where you shave off just a little bit from the proton to get an atom with Z=0.92, or something like that. I haven't done the calculation, but obviously at some point the stability goes to zero. You obviously can't hold two electrons with, say, a quarter of a proton, so there's got to be some definite value where the energy of the bound system is exactly equal to the energy of the dissociated system. I'm going to call it "proto-helium", and that's the case we want to look at.

Incredibly, we can guess the form of the solution for this case! And that form will be familiar to readers of this blog, because it's almost exactly the same form I've used to solve not one but two problems in just the last month. I used this function to guess the deposition pattern of a pencil-beam of silver atoms passing through a quadrupole Stern-Gerlach field, and it was also the solution for the effective brightness of a drywall-sheet-cutout moon tilted for maximum illuminating power in the night sky. The function looks something like this: 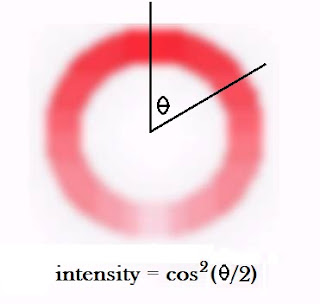 What I'm showing here is the square of a spinor amplitude function, and in quantum mechanics we have to ask the question: just what was the function we had to square to get this distribution? In the case of the quadrupole Stern-Gerlach experiment, this was the function:

and when we draw it to show which way the spin is pointing, it looks something like this: 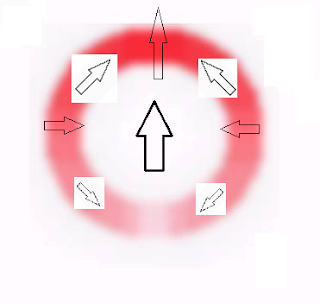 This is almost the function I need to solve my "proto-helium" atom, but unlike the quadrupole field, where the spinor orientation rotates retrograde to the pattern, we want standard rotation for proto-helium, so the spinor is always pointing radially outwards. It turns out that's easy to do: we just flip the sign of the spin-down component:

and you get the spins all pointing straight out: 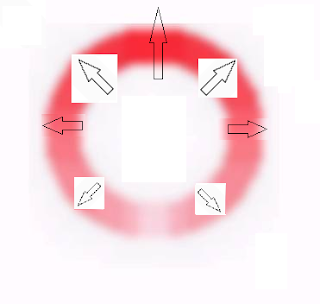 I know it looks a little weird: the positive sign gives you the retrograde spin, and the negative sign gives you the conventional rotation. Shouldn't it be the other way around? The truth is I don't really know which is which. There's a certain amount of human convention in spinor algebra, and up to a point you're free to choose your own convention as long as you stick with it consistently. Since I solved the retrograde case first, that became my convention, so by flipping the sign now I'm just being consistent. I think it could have gone either way.

But we're not quite done yet. This is supposed to be the angular distribution amplitude of an electron in three-dimensional space, but it's just a two dimensional function. We have to extend it to three dimension, and we have to do it so that everywhere on the surface of a sphere, the spinor is pointing radially outwards. I think I've done the algebra correctly when I write the function like so:

And from that angular distribution I am going to construct the wave function for proto-helium. We're not there yet.  This represents an electron whose density is biased to the Northern Hemisphere. The other electron is going to have a very similar function, but biased towards the southern hemisphere. When we combine those two electrons, we will find that the spin is pointing everywhere radially outwards so there is no net spin, and the charge density is equally distributed over the spherical surface. These are critical requirements for a physically reasonable solution. These conditions apply to proto-helium, and they also apply to helium and its entire isoelectronic series. We're not done yet. There is still the symmetrization to talk about, so that the wave function changes sign upon exchange of the two electrons; and we haven't even considered the radial distribution yet. But all in good time, my friends; all in good time.

Great thoughts you got there, believe I may possibly try just some of it throughout my daily life.