When we left off the other day, I had set up some calculations on the Helmholts Resonator. You had a beer bottle with a volume of 300 cc’s, and a neck 3cm long with a cross-section of 2 square centimeters. The idea was to treat the plug of air in the neck as the mass, and the enclosed volume as the spring. Here’s how the calculation should go.

I suggested allowing for a one percent compression of the volume, so you’d have a pressure excursion of 1kpA.That’s a little extreme; you can see it leads to an excursion of 1.5 cm each way for the plug. A little much, but it will work for purposed of calculation.

I explained that the 1% compression gave you a volume energy of 0.15 joules. Of course, that turned out be wrong: I should have gotten 1.5 milliJoules. Let's assume we're all agreed on that. If you use 1.3 kg/m^3 for the density of air, you should be able to equate that to the maximum kinetic energy of the plug, giving you a velocity of just under 20 m/s. Are you with me so far?

Now comes the fun part. You have to equate the maximum plug velocity and the maximum excursion to a sine wave oscillation. It will help to draw a graph: 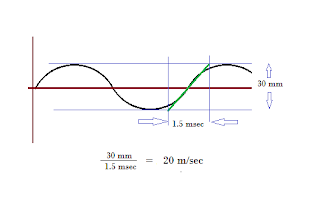 Without going through too many details, it should be pretty clear from the graph that the only way you can get an excursion of 30 mm with a velocity of 20 m/sec is if it's spread over a time span of 1.5 msec. That pretty much defines the frequency of the sine wave. You can just eyeball it from the graph, but it comes in handy to know that the maximum slope of a sine wave projected from peak to peak gives you a span of exactly two radians. Either way, you get a frequency of about 200 Hz. It's close to Ab below middle C.

Let's check it against the formula from Wikipedia, which I included in the earlier post. Plugging in the known value of 340 m/s for the speed of sound in air, we get a frequency of 250 Hz. Not bad, but why the discrepancy?

It turns out that in my calculation, I didn't account for the effect of adiabatic compression. This actually baffled Isaac Newton, who worked out a formula for the speed of sound in air and couldn't figure out why it was off by 20%. It's because air heats up when it is compressed, and that has the effect of making it stiffer, or harder to compress. It cools off again when it expands, so you don't actually notice a change in temperature, but it definitely affects the frequency and speed of propagation. You're supposed to use what's called the adiabatic compressibility of air to get the calcuation right. It's a bit of thermodynamics that I'm not going to get into any deeper at this point.

And that's how the calculation goes, using the energy method. There's a bit of a post-script to the story. As I mentioned, this all happened in first-year engineering physics. Around the same time, the prof did an in-class demonstration of the effect of breathing helium, and how it makes your voice "go higher". He explained that the reason your voice got higher was because the speed of sound in helium was higher than the speed of sound in air. I'm not making this up, that was his explanation. He actually said something about the waves reaching your ear more quickly. It just didn't make sense.

I went up to him after class and told him it didn't make sense to me, but he scoffed at my objection. He said something about how he wasn't here to spoon-feed me; if I didn't like his explanation, then it was up to me to figure out a better one. It was pretty clear to me that he was just expressing his contempt for a typical undergrad, and an engineer at that. But I took his advice at face value, and it turned out to be pretty good advice.

It was after I figured out how the Helmholtz resonator worked that I figured out what the deal was with the helium. Your lung/mouth/nasal system acts as a resonant cavity, and when you replace normal air with helium, you change all the resonant frequencies. Your voice doesn't so much get higher as the higher frequencies get preferentially amplified. It's like turning up the treble setting on your stereo. (In case you're wondering, a "stereo" is a kind of big giant iPod that people used to have in the 70's).
I went to the prof after I figured this out, and told him what I thought. He said it was nonsense and he could prove it. He took me up to the lab where there was a bottle of Helium, and we both sang a note, then breathed in and tried to sing the same note. "There! You see?" he said. I tried to tell him that we had actually both sung the same pitch each time, but he had had enough. He told me to go away and stop wasting his time.

That's not quite the end of the story. Twenty years later the professors at the University of Manitoba went on strike, and I went down to the physics building and found a classroom of students with no teacher. I started doing problems from the back of the chapter, when this same professor walked by the classroom and saw me. I'm pretty sure he's the one who called the campus police and got me arrested.
It didn't work out all that badly for me. I made all the papers, and I was a bit of a hero for a day or two. The strike ended the next day, and I like to think all that embarrassing publicity had just a little bit to do with it.
Posted by Marty Green at 11:57 AM