How the tides slow down the moon

I’ve noticed some of my most-read posts aren’t the heavy duty quantum mechanics but the more bread-and-butter physics questions. I got invovled with the moon last month because I wanted to make a point about the quadrupole component of the magnetic field in the Stern Gerlach experiment, but then the moon topic took on a life of its own. First I got messed up with the reflectance, and then I said I was going to explain the tides. I guess now it’s time to pay the piper.

The easy thing to explain about the tides is why there are two of them, I’ve already shown the picture that explains it completely. It’s the distortional component of the moon’s gravity that causes the tides, not the direct force, and it’s easy to see that the nature of the distortional force is what we call the quadrupole field.

The tough question turns out to be: what is the effect on the earth-moon system of the tidal friction? It’s not too hard to convince yourself that it ought to slow down the rotational speed of the earth. But what about the moon’s orbital speed? If the earth is slowing down, shouldn’t the moon speed up? Otherwise how would angular momentum be conserved?

It turns out this question drove me crazy for about two days. I thought I had it all figured out: the moon speeds up to conserve angular momentum, and therefore it is dragged down into a lower orbit. Why lower? Because the velocity of a satellite in a low orbit is greater than the velocity of the same satellite in a high orbit. Then I looked it up on Wikipedia, and it was backwards. They had it going into a high orbit to conserve angular momentum!

I have to say I never like to be on the wrong side of Wikipedia when it comes to questions like this. The people who write articles like this one  aren’t just pulling that stuff out of their ass. So where was my mistake?

It’s actually hard to believe, as near as I can figure out, this is how it works. If you somehow get up into orbit and push on the moon to speed it up, it actually slows down. No fooling. Let’s say you set off an atomic bomb on the leeward side of the moon, to boost its orbital speed. The effect of that one impulse is to throw the moon into an elliptical orbit. But if you keep on continuously setting off bombs, until you’ve gone one full orbit, the effect of the ellipticity (is that a word?) has to cancel itself out. The net result is you’ve got yourself back into a circular orbit, but it’s higher up than the one you started with. But being a higher orbit, it’s also a slower orbit. (Yes, that’s how it works.) By pushing on the moon to speed it up, you’ve ended up slowing it down. You’ve driven it to a higher orbit, but it’s velocity is less than when you started out.

There’s still one thing missing from this explanation, and that is a mechanism. It’s fine to say that the moon speeds up to conserve angular momentum, but what makes it speed up? I have to admit I had an awful time getting this question all straightened out, but to give myself credit, I had the mechanism right all along. It’s the shift in the tidal bulge. The picture we showed earlier showed how the bulge would look if the earth and moon were just sitting there. In fact, the earth is spinning fast, dragging the bulge along with it, and so the moon is effectively trailing behind the bulge. 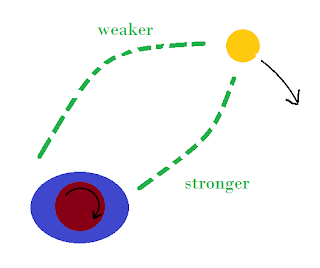 I’ve drawn the picture here showing the bulge at a 45 degree angle to the earth-moon axis: this isn’t the physical case, it’s the ideal case of a uniform ocean with a natural frequency exactly equal to the driving frequency of the earth-moon system. In other words, it's an ocean at resonance, cresting to the maximum possible power and dissipation. You can see that the gravitational effect of the bulges is to drag the moon along, tending to speed it up to synchronize it with the earth. The leading bulge, being closer to the moon, is more effective than the trailing bulge. The perverse response where the moon actually slows down in response to being dragged along is another thing altogether.
Posted by Marty Green at 4:42 PM