So how fast was that wave anyways?

When I left off yesterday, I had a one-kilometer high tidal wave stretching half-way around the earth. Here is the picture we were working with: 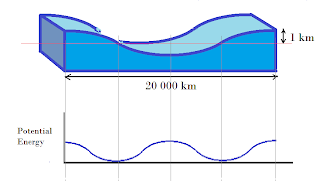 Treating this as a standing wave, we figured out that when the potential energy was entirely converted to kinetic energy, so that the surface of the ocean was perfectly flat, we would have a maximum water velocity of 140 meters per second. The question was: how long would it take to flatten the bump and fill in the trough?

We might want to use calculus to handle those tricky shapes, but for what we are doing it will be good enough to just ballpark it. You can see that the bump is 5000 km long by 1 km high, which is roughly 5x10^9 square meters. We are moving water at a speed of 140 m/s through a cross-sectional area 1000 meters in height, for a net throughput of 140 000 square meters per second. It's not to hard to work out that the time required is 35,000 seconds, or pretty close to ten hours.

That's pretty sloppy, on two counts. First, the actual volume is less than we estimated, because the height of one kilometer does not prevail over the entire 5000 kilometer span of the ocean. Secondly, the average speed is less than we estimated, because the peak velocity only prevails at the moment the ocean is perfectly flat. Happily enough, these two errors cancel each other out, and if I'm not mistaken that makes our value of ten hours pretty much exact.

What does that mean physically? Ten hours to go from peak amplitude to flat, ten more hours to peak the other way, and double again to return to our starting configuration. That's forty hours for one full cycle. I already said I'd cheated by looking at Wikipedia, and their answer comes to thirty hours. It's not bad considering that they've done the calculation for the entire spherical planet, and our calculation was only for a rectangular strip.

So how fast would an ocean wave be traveling? Remember what we've just done is a standing wave calculation, which is equivalent to two traveling waves passing through each other. It should be fairly clear that the forty hours we calculated is the time for the traveling wave to traverse the length of the trough, which was 20 000 km, or half the circumference of the planet. So the time to circle the planet at the equator would then be eighty hours, or three and a half days. That gives a speed of close to 300 mph, not too far from the figure of 200 mph that I guessed last week as a ballpark.

As I mentioned previously, the energy method is a great way of avoiding differential equations. To me, this isn't just a matter of trading one mathematical technique for another. The nice thing about tracking the energy is that it lets you keep your analysis firmly grounded in actual physics. You've always got physical pictures to check yourself against if you find yourself getting lost. Of course, the "special-casing" (that is, using actual arbitrary values instead of letters to symbolize your parameters) is a big part of that. It works because in so many situations, the frequency of these oscillating systems is pretty much independent of the amplitude. So pick a nice convenient amplitude and just run with it.

I'm not sure, but I think I remember the first time I used the energy method on an oscillating system. If I recall, it was a first-year engineering physics lab where we were supposedly going to calculate the speed of sound by blowing across the mouth of a beer bottle. I think I'll take up that topic when I return next time.