I set myself the challenge yesterday of showing that the semi-classical antenna picture of the hydrogen atom gave us the same physics as the Standard Model, the Copenhagen picture of quantum mechanics. Actually, it was more of a reverse-challenge: the idea was to find a single example whereby the antenna picture fails to give the correct physics. If classical electromagnetics is the miserable failure at the atomic level that everyone seems to say it is, it should be easy to find examples.

The spontaneous transition of hydrogen from the excited p-state to the ground s-state is as good a place as any to start. We can readily compare the predictions of the Standard Model with those of Maxwell's Equations. I haven't done the calculation yet, but we'll see how it goes. Let's open the show with the Copenhagen Version.

In Copenhagen, the hydrogen atom starts off in an excited state, and there is a certain probability that it will instantly jump to the ground state, emitting a photon in the process. Of course, this is wildly out of whack with what the semi-classical picture says; but that doesn't matter. What matters is the measurable outcome of an experiment; and in practise, the simplest way to measure this is to prepare a sample of hydrogen gas with a known energy and measure the radiation which it gives off at that transition frequency.

It has to be a pretty low energy, because we want to be dealing with essentially a two-state system. If we give it too much energy, then other higher-energy states start to become "populated", and the system gets more complicated. Let's say we have one million hydrogen atoms, and we give the system enough energy so that one percent of them are in the excited state. Then we can calculate how much they should radiate.

It's a pretty sophisticated calculation, but fortunately we have some help from Richard Fitzpatrick's excellent  farside website at the University of Texas. He starts off by computing what they call the dipole coupling between the ground state and the three p-states, taking the Bohr radius a0 as the reference: 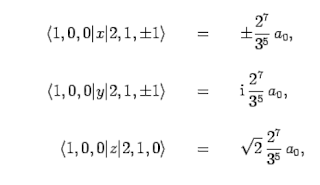 The coupling looks a little different for the first two states, but that's just because of the way physicists define the states according to z-axis spin, as opposed to the so-called "vector states" of the chemist. A chemist's Px and Py state would be a sums and differences of the first two "physicists states", and with the normalization you get back the factor of root two that appears in the third expression.

It's encouraging to note that this business of calculating the dipole moment is very similar to what we're going to do later in the semi-classical analysis. Of course, we use different words to describe what we're doing. The Copenhagen people talk about something called "Fermi's Golden Rule" for calculating these transition rates. It's hard for me to understand how people are so quick to accept something because they call it a Golden Rule, or any kind or rule for that matter. What's going to be different about the semi-classical calculation is that I'm not going to tell you that such-and-such is the "rule". We're going to be able to relate to real physics at every step of the way. But I digress...

We note that the frequency of this transition is close to 2.5 x 10^15 Hz, giving a wavelength of 120 nanometers. Furthermore, the energy of the excited state is 3/4 Rydberg, 10.2 electron volts. Fitzpatrick then uses an equation derived earlier for the transition rate:

The "lifetime" of the p-state is evidently a nanosecond or two. What does this mean in terms of the physics we can measure? Let's recall that we had a sample of 1,000,000 hydrogen atoms, with one percent of them in the excited state. I'm putting the numbers together and I get a power output of very close to 10 microwatts. That seems awfully high for such a tiny sample, but remember the excited state has a very short lifetime indeed. And also, it's worth noting that the numbers we picked correspond to a sample at quite a high temperature. The Boltzmann factor of kT is only 0.026 eV at room temperature, and to get 1% of the atoms in the excited state (energy = 10.2 eV) we need the ratio E/kT to be the natural log of 100. This pushes the temperature up to around 5000 degrees if I'm doing it right. (EDIT: Now that I try again, it comes out to 24 000 degrees K. I don't know where I got 5000. In any case it's really hot.) So 10 microwatts it is, I suppose.

Tomorrow we'll see how the calculation looks if we treat the atoms as tiny classical antennas. Does anyone want to bet we get the same answer?