In which I figure out how to count modes

Two years ago I did some very cool stuff about the thermodynamic equilibrium of a radiation field with a harmonic oscillator. One of the pieces of the puzzle was to figure out how many electromagnetic standing wave modes you could put in a rectangular cavity. I had some trouble with this: I could get it in the ballpark, but the way I counted modes they came in groups of three; and the actual formula that I looked up didn't have that expected factor of 3 in it. You can read the original article here.

As a result of a recent discussion on stackexchange.com, I think I've found my mistake, and it's quite interesting. First of all, here is the picture I had of a typical mode: 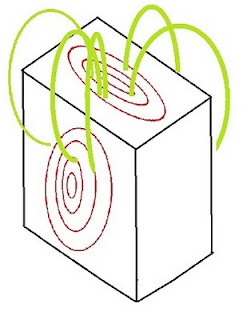 The green lines are the electric field and the purple lines are the magnetic. You can see both fields to to zero on one of the faces. There are three choices for the blank face, so every unit cell gets three standing wave modes. Right?

The guy who posted the question on stackexchange (he goes by the awkward moniker of e-journal_clasica) started off by giving these formulas for the electric field of a standing wave:

My problem was to reconcile these formulas with the picture I had of the physical modes. I started off by noticing that his condition on E1, E2, and E3 was satisfiable infinitely many ways; but in particular, it was easily satisfiable for the choice of either E1, E2, or E3 =0. And weren't those my three mode configuarations?

Ah...but are they orthogonal? That's when I noticed something very interesting, and I wonder if you can see what it is.
Posted by Marty Green at 8:47 AM