How Electrons are Different from Baseballs

The other day I did a calculation using the Principle of Least Action to calculate the trajectory of a baseball. I didn't do it exactly the way Feynman does it. He takes the initial coordinates (in time and space) and the final coordiantes, and figures out the path which minimizes the action using the Calculus of Variations.

I did it a little differently. I started with the initial position and velocity, and calculated the rate of change of action along that path. Then I looked for parallel paths which had the same rate of change, so the action was growing at the same speed. It turned out that for a slightly higher path, the ball had to travel faster. (The potential energy was higher, so the kinetic energy also had to be higher to maintain a constant difference). I therefore had to bend both paths so that the direction of propagation was always perpendicular to the surfaces of constant action.

This gave me the correct radius of curvature for the initial trajectory. But there is a little problem with the second baseball. The hypothetical baseball on the higher path ends up with the wrong radius of curvature. In my example, it was going one percent faster than the lower baseball: 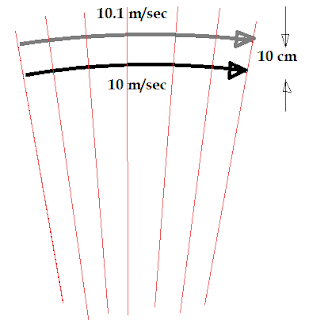 You can easily see from the geometry that the radius of curvature is 10 meters. If I apply v-squared-over-r to the lower baseball, I get an acceleration of 10 m/sec, which is right for gravity. But if I apply the same formula to the upper baseball, I get an acceleration of 10.1. It's not quite right. So I have to wonder what's going to happen when I apply this analysis to electrons.

We know the electrons are governed by a wave function. Now, the only wave a wave can curve is if it looks something like the drawing here, with the parallel wavefronts lock-step with each other. That's how the wavefronts look if you have, for example, light curving through a medium of varying refractive index. If electrons are waves then they have to do something almost the same.

If we're dealing with electrons, this picture might represent a beam passing through a parallel-plate capacitor, with the positive charge below so the electrons are pulled down. So the potential energy is greater for the upper path, which makes the kinetic energy lower, which makes the momentum lower. So far so good...the wavefronts are farther apart, and we know that wave number is momentum in quantum mechanics, so that means the upper electrons are travelling slower.

But if the waves are in lock-step, the upper waves must be traveling faster! That doesn't make sense. Let's think about it again. Suppose it's light travelling through a variable medium. If its denser on the bottom, it travels faster on top. So it curves downwards. Just like the baseballs. That's what the picture shows. The beam curves downwards because it's travelling faster on top.

I have the answer to this little paradox, and I'll explain it when we return.