When we left off, I told you I had come up against a paradox when applying the principle of least action to the trajectory of an electron. I started by doing it for baseballs. But I didn't do what Feynman does, where he minimizes the action between the starting and ending point. I assumed an initial trajectory, and claimed that the subsequent trajectory had to remain perpendicular to surfaces of equal action. By comparing trajectories of corresponding action at different elevations, I showed the only way to get this to work out was to have the trajectories curve. And I actually got the correct curvature for a baseball.

Something nasty happens when we try to apply this to electrons. Instead of a baseball under the influence of gravity, we send an electron beam between the plates of a charged capacitor. The "surfaces of equal action" naturally become the surfaces of constant phase for the electron wave function. They look like this:

The paradox is resolved when we examine the group velocity of the wave. Electron waves are not like light waves, where all frequencies travel at the same speed. For light waves, you can easily calculate the velocity as the frequency times the wavelength, and this looks like it should work for electrons too. But you may have heard people talk about group velocity and phase velocity. I'm not about to explain why it works this way. That's a long story. But whether or not you understand the math of it, you may have heard that for electron waves you need to look at the group velocity to see how fast the electron is actually moving.

The formula for group velocity is a little different from the obvious formula for phase velocity. This is how it goes: 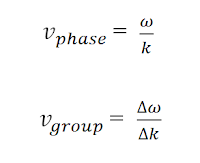 Let's see if we can calculate the group velocities for the electron wave along the two trajectories shown here, and see if the faster wave isn't actually going slower!

We can start with the equation for the wave along the lower trajectory. Using the complex exponential, it is just:

To get the group velocity, we need to figure out what is w (omega) as a function of k. Well, omega is the frequency, which lines up with the energy, and k is the wave number, which lines up with the momentum. We can arbitrarily declare the potential energy along the flat trajectory to be zero, which makes the energy simply proportional to the square of the momentum.  We can arbitrarily choose our units so  k=1, and then the proportionality becomes exact:

So the group velocity it 2, which is twice the phase velocity.

How about the upper path? Well, the total energy of the upper electron is the same, because the two paths started out as a simple wave in free space. But when they enter the capacitor, the one closer to the negative plate (the upper path) loses kinetic energy and gains potential energy. Since we show (in our diagram) that the wavelength is one percent greater, we interpret this as a one percent decrease in momentum. Remembering that total energy is given by w and kinetic energy by k-squared, we must have:

But remember that k for the upper path is numerically 0.99  which means the P.E. along that path must be 0.02 to keep w constant=1. You can see this is correct because for k=0.99 we then get w=1, which are the correct wave parameters for the function as sketched.

Again, if we differentiate w with respect to k, the P.E. term disappears (since it's a constant) and we get once again dw/dk = 2k.

thanks for this article. the concept of phase velocity has now become more clear

I'm glad you enjoyed the article, but I don't feel worthy of the praise you've given me. I'm going to assume you meant to say the concept of "group velocity" has become more clear, because "phase velocity" is the obvious thing. It's true that I introduced the not-so-obvious equation for group velocity, but then I proceeded to use that equation in a very mechanical way. I don't feel I explained why it worked. I might take that up on another day if I can think of a good way of explaining it. But this example definitely shows why it's something we have to be concerned about.

In your blog, you have an equation exp{j(kx-wt)}. Then you went on to choose k = 1. So if you chose k = 1, then what's the meaning of the following equation where there magically appears w = k^2? That is, if you already chose k = 1, then how does that lead to the equation w = k^2?

I'm not sure I like the way I phrased that passage. If I leave out the phrase "...k=1, and then...", the offending phrase becomes "we can arbitrarily choose our units so the proportionality becomes exact". I think that's OK. The reason for the relation between w and k is that w (frequency) is proportional to energy, and k (wave number) is proportional to momentum. And energy is proportional to the square of momentum.

But it's the principle of stationary action, not necessarily least action. If you look at the trajectories which bend upwards, it's clear that a slight variation upwards will increase the action (faster and further) while a slight variation downwards will decrease the action (slower and closer). The action is not stationary.
Now if you do the same for a trajectory which bends downwards, the variation upwards will not change the action (more velocity compensates for less distance) and neither will a variation downwards (less velocity but more distance). So in this case the amplitudes of the nearby trajectories interfere constructively and that's what we will observe.