Again with the rotor bars

I had a big thing going last year about the rotor bars in an induction motor, and I still can't figure it out. But once in a while someone comes along and posts a comment which purports to set everything straight, as one of my readers did yesterday on this post. John wants me to analyze the motor as magnet-on-magnet action instead of rotor bars in a magnetic field.

It's a good theory but I don't buy it. John doesn't deal with the essential problem: how do you calculate  the torque? The problem is that ILxB actually gives you pretty much the right answer, but fails to answer the question I asked with this picture: 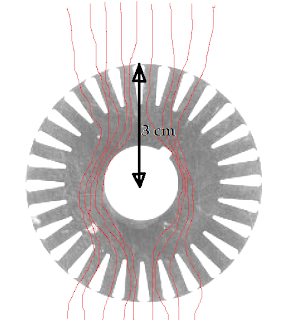 how do you get torque if the field lines curve away from the rotor bars, avoiding the copper almost entirely?

I was tempted to answer this question by suggesting that the field lines exert a torque not on the copper bars, but on the atomic-level circulating currents in the magnetic domains of the iron. We know that iron can amplify a magnetic field up to a thousand times; this can only mean that the atomic-level circulating currents on the surface of the iron are a thousand times greater than the macroscopic copper-wound currents that we can see. Does this explain the torque of a motor?

I don't think so. My problem with this explanation is all of a sudden, there's way too much torque. Because the standard macroscopic analysis gets me in the right ballpark. I don't want a correction that makes the torque a thousand times bigger. The problem with the standard analysis isn't the result...it's that nagging question: don't the magnetic field lines curve away from the copper to stay inside the iron?

I want to show what I mean when I say the standard calculation gives the right answer (assuming the field passes through the copper bars, so I put some dimensions on my picture. With a 3-cm radius, the rotor shown here would look OK in an ordinary 1/2HP motor. It's not hard to see that there are about 10 square centimeters of rotor bar cross section, which would typically sustain a current of around 2000 Amps. A good strong magnetic field achievable with laminated iron would be around 1 Tesla (that's volt-seconds-per-meter-squared). Is this enough to calculate the torque? Just about...I still need to give you the length of the rotor bars. Let's call it 12 centimeters:

To get the torque, we multiply by the radius (3 cm) which gives a torque of about 7 N-m. Now horsepower is torque times frequency (in radians per sec.) Remember that 3600 RPM is 377 radians per second...except the typical motor is four-pole, so you only get half of that...and also, the utilization factor of the copper bars is certainly under 50% with the sinusoidally varying currents and the phase shifts. Lumping it all together I get:

which is one horsepower...just about where we want it.

Except for one problem: the magnetic field inside the copper bars is very low. Look at the picture again. The field goes into the iron. I could try and fix this by analyzing the atomic-level currents in the magnetic domanis (1000x greater than the copper bar current) that would really mess up my calculation. So I still really don't know what to do.

The irony is that I think I'm going to explain the great paradoxes in quantum mechanics but I still can't seem to figure out how a motor works.

Marty,
The current does not need to interact with a surrounding magnetic field to generate a force.

A moving charge in a magnetic field does not generate a force. I know , I know we are told F=q(uxB), but what is qu? A current. Remember:
J = delxH.
Thus we can see that:
F=(delxH)xB.
Were H is the field generated by the moving charge and B is the surrounding field density.

The magnetic field generated by a wire carrying a current is:
uI/(2PIr),
where r is the distance from the wire. So the force per unit length of wire is going to be:
F = ((delx(uI/2PIr))xB)dl .
Thus integrating over l you get:
F= L*uI*B/(2PIr).
This is why the formula: F = ILxB gives the right answer even though physically the electronics don't pass through field.

This is a very promising argument but I am unable to personally verify the integration. I agree there ought to be a way of analyzing it as a field-on-field interaction, but I still find it very odd that you should not get the same result by alternatively analyzing by ILxB. Shouldn't they both give the same answer?