A few months ago I did a series of articles about light reflecting off the moon. It actually makes a difference if you treat the moon as a polished steel mirror versus the case of a white painted ball. The mathematics of the polished steel moon are especially simple: it turns out that for a uniform illumination, the light is scattered equally in all directions. It's the same as billiard ball collisions of a hard sphere.


There is a third case which is especially important in physics: coulomb scattering via the 1/r-squared force, also called Rutherford Scattering. Rutherford worked out the mathematics of the scattering in order to analyze his famous experiment of bombarding gold foil with alpha particles. I looked up the formula and this is what I found:

I'm not actually interested at this point in the Rutherford experiment: I got onto this topic because Feymann wants me to draw some kind of cosmic inferences about the nature of the wave function by considering the symmetries of the electron-electron collision. In the meantime, I've gotten bogged down in the classical physics. I tried to analyze this problem by making some approximations, and I thought I was doing OK, until I saw this formula. I really wasn't expecting to see the fourth power of the angle anywhere, and I couldn't figure out where it came from.

I started off by considering the case of small deflections...that is, the case where the two electrons don't come too close to each other. Well, that's not quite right. I guess I started off with the case of the head-on collision where both electrons bounce back at 180 degrees. Of course it's the case that can virtually never happen in practise, but it's also the case where you can easily calculate things like the point of closest approach. I did some approximations to try and work out the radiative losses of the collision, which you can read about here. After that, I tried to work on the opposite end: the case of the glancing angle of collision. That's where I came up against that formula with the fourth power.

After struggling with it for awhile, I figured out what was what in the formula and drew the following picture: 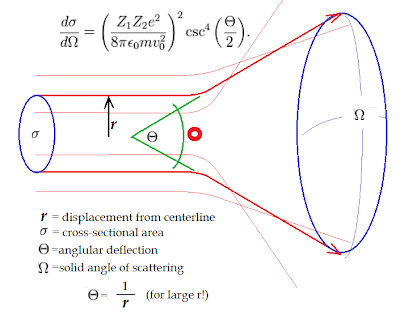 It's kind of a funny picture, but it actually shows the physics of what's going on. You really have to be careful to remember that sigma and omega are complimentary parameters in a way: the incident electrons passing through the sigma surface actually end up entirely outside the solid angle omega, and vice versa. It's really easy to overlook that fact, and if you just plow ahead and do the calculus, you get exactly the same result either way because you end up dealing only with the differential cross sections.

The math itself is also kind of ass-backwards. The formula presents the result in terms of solid angles and intercepted cross sections, but when you actually work out the physics you deal with centerline displacement and deflection angle. Those are very different parameters, and the "natural" formula, in terms of displacements and deflection angles, is actually really simple: I've put it at the bottom of my diagram, and you see that for large r the scattering angle is simply inversely proportional to the displacement from centerline.

It's not too hard to see why this has to be true. We can easily believe that most of the interaction between the two particles occurs within a linear distance (along the line of travel) of approximately r. And the force of interaction is obviously 1/r^2. For constant velocity, the time of the interaction is proportional to the distance r: and the total momentum transferred to the moving particle in that time is just (force)x(time), which is clearly proportional to 1/r. For small angles, the change in momentum is proportional to the anglular deflection, and that's about as simple as it gets.

The question is: how in the world do you get the fourth power of the half-angle into the formula???

It is my sad duty to report that the fourth power indeed falls out when you do the calculus and substitute the variables. I'm not even going to try and show you how it works: if you really care, you can figure it out for yourself. Just remember that the solid angle is proportional to the square of the deflection angle, and of course use the small-angle approximation to get rid of the cosecant (inverse sine).