How elastic is a collision?


In Volume 3 Chapter 3 of the Feynmann Lectures, Feynmann takes up the question of electron-on-electron collisions. Working in a center-of-mass frame, he says it’s pretty hard to distinguish between the two alternatives of a glancing collision versus a more direct one: 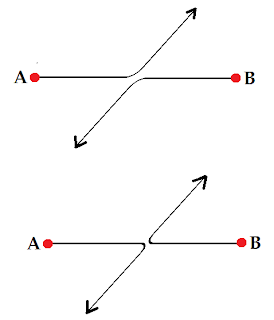 So I thought I’d try and work it out and see just how much energy loss there should be, and that’s the project for today.

It shouldn’t be too hard to figure out the radiation. It was just a few weeks ago that we did the Larmor Formula, which explicitly gives the power of a moving charge as a function of its acceleration. So all we have to do is plug in the numbers, right?

It’s not so simple. There are two accelerating charges, and they are very close to each other. And the acceleration of one is the exact opposite of the other. So the radiated waves cancel each other out. Apparently, there is no radiation after all….is there?

It’s not so simple. Yes, the radiation patterns of the two electrons are equal and opposite to each other. But they are not quite  on top of one another. The patterns are displaced in space. There is a name for this type of thing: it’s called quadrupole radiation.

If you ever want to convince yourself that you’re not smart enough to get involved with physics, you should check out this incredibly intimidating lecture on quadrupole radiation by Duke University professor Robert Brown.  From what I can gather, Brown is that extreme rarity…a physics prof who really understands all that insane 3-d calculus and can relate it to physical reality. Based on the physics profs I’ve actually met in my life, I would incline to believe that guys like Brown don’t actually exist. But in the face of direct evidence, it’s pretty hard to deny that there are people who actually function at this level.

No, I’m not going to do all that 3-d calculus. I have to admit that I function on a very different level; one might call it a lower level, and yet even so I am able to achieve certain results. What I’m going to do will be a very rough ballpark of the actual radiation losses of the colliding electrons. Let’s give it a go.

It will be most convenient to consider the case of the direct collision, where the two electrons bounce straight off each other. If you’ve been reading my blogposts, you know I like to work in actual numbers, so I’m going to give them initial velocities of 1,000,000 meters per second. I make the energy aroun 2.8 electron volts at this speed. This is a very typical speed for an electron in an atom; for example, it’s close to the energy of the p orbitals in hydrogen.

Now let’s look at the collision. Of course the electrons don’t actually collide and bounce off each other: they are repelled from a distance by electrostatic forces. The question is: how close do they come?

The speeds invovled are on the order of atomic orbitals, and the distances are also going to be on that order. We can do the calculation without too much trouble. I make it 2.5 Angstroms, or 250 picometers if you like. You can verify this for yourself: just take the total energy of both electrons and equate it to the energy of a system of two charges separated by a distance r:

Now we start with the ballparking. I’m going to draw a line in the middle of the page and say that each electron approaches within 125 picometers of that line. I’m also going to say that the electron reverses its velocity via uniform acceleration over an approximate distance of…125 picometers. I’ve drawn a graph of the interaction as I intend to approximate it: 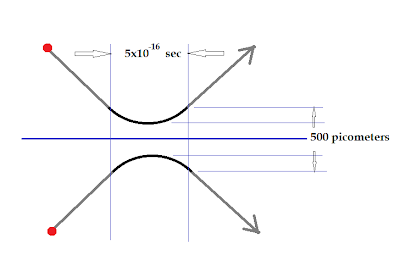 I did some basic geometry to scale in the time factor, based on our initial velocities of 1,000,000 meters per second. You can see that the interaction takes place over a time span of 5x10^-16 seconds, or 500 micro-picoseconds. Or 500 nano-nanoseconds if you prefer.

We now have all the parameters needed to do the basic Larmor Formula calculation…that is, we have an acceleration, a charge, and a time span. What is the acceleration? Well, the speed changes uniformly from positive to negative one million m/s – a change of 2 million m/s – over a time span of 500 milli-femto seconds. I make that an acceleration of 4x10^21 m/sec. We can verify this by equating it to the force of repulsion between two charges, using F=ma and k(Q^2)/r^2: I actually get exactly the same answer, which is unusual for me. But in this case I’ll accept that it means I’ve got it right.

But why am I going to use the Larmor Formula? Didn't I already say that it will give the wrong answer because the two electrons cancel out each other's radiation patterns? Yes, that's right: but I'll correct for that later. First of all I'm going to do the "naive" Larmor calculation.

I think we’ll leave it off for now and continue with the calculation tomorrow.