How to Approximate Arc Lengths

When I wrote about pi the other day, I said that I was originally planning to use some tricks I developed over the years for approximating arc lengths. Instead I ended up using the very well-known (I hope!) approximation for sector areas, based on two-thirds the area of the circumscribing rectangle: 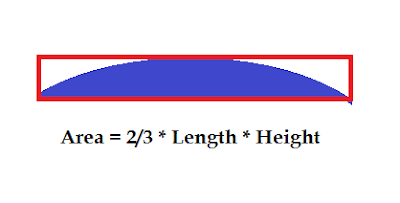 If you've taken first year calculus you can easily see why it's true. If you're not quite sure, remember that every sufficiently shallow arc is ultimately equivalent to a parabola.

Today I want to tell you about my approximation for arc lengths. I haven't seen this anywhere, but that's not to say it's some kind of deep secret. It's just not something that gets mentioned too often, as far as I can see. And yet it comes in handy now and then.
Here's how it goes. You take the segment of arc, and of course the simplest approximation is to take the straight line distance. And you won't be that far off either. But of course you can do better, by taking the midpoint of the arc and using two line segments. Here I've drawn the straight-line in blue, and the bisected arc in red: 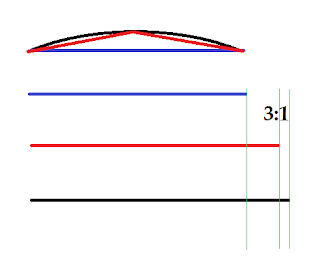 And the true distance is shown in black. The funny thing is that whatever you gain by bisecting the arc and using two straight lines instead of one, you just need to add another 33% to get the exact arc length. That's how it works. I hope I've explained it clearly.

The other question is why does it work. Maybe I'll let you figure it out for yourselves. Of course you can do it with calculus, and you can also do it by working from the Taylor Series for sine and cosine. But it's probably the most satisfying if you can reason it out from straight geometry. I'll leave it up to you.

Gee, math is tough. Glad you hate it this much, though. :D Thanks!