When I left off yesterday, I had sketched out the proposed symmetric solution of the two-electron potential well. I got it by taking two simple solutions where the electrons crowded themselves to opposite sides of the box, and adding those two solutions together.

The peculiar thing is there is another possible solution that you have to also consider: it's called the anti-symmetric solution, and you get it by taking the difference instead of the sum. The wave function sketched in the coordinates of the two electrons looks like this: 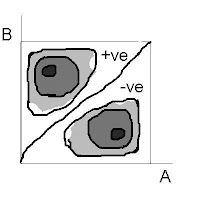 And the question is: which one has lower energy - the symmetric or the antisymmetric combination? And it's not totally obvious to me what the answer should be.

So I posted this question on an interned forum, and one guy gave the very helpful suggestion of "turning off" the repulsion of the two electrons, and then turning it on again very slowly. When you turn it off, the two blobs come together (it's the product of simple sine waves); then, when you allow the electrons to repel just a little bit, this blob can only deform in one way: it has to stretch towards the two corners just like the symmetric case. So that's what the solution has to look like. And in fact the energy of the anti-symmetric case turns out to be quite a bit higher.

I have to say it was a shock for me to contemplate that the shape of the solution might depend on how strong the repulsion was between the electrons. This really wasn't what I expected. And then it occured to me that if the solution depended on the strength of the repulsion, then it also depended on the size of the box. For real electrons, whose strength is constant, you get different waveshapes as you vary the size of the containment.

This is amazing. For the case of weak repulsion, the solution approaches the simple product function of two sine waves. In other words, both electrons fill the lowest energy state with little regard for what the other one is doing. Obviously for real electrons this must correspond to the case of the very large box.

But it doesn't! It turns out that the case of weak repulsion corresponds to the very tiny box. The repulsion only gets to be important as you make the box bigger and bigger. And a funny thing happens in the limit of the very big box: the symmetric and anti-symmetric solutions converge to the same energy! (In technical terms they become "degenerate".)

That's what happens, and I'm going to explain why in my next post.
Posted by Marty Green at 10:45 AM

And for all that I realized a year later that my solution was incomplete. For the rest of the story see my blogpost of April 2011, "The Two-electron Well Revisted", http://www.marty-green.blogspot.com/2011/04/two-electron-well-revisited.html