I promised to catch up on some topics I skipped over, so here goes. This problem arose when I was floundering on the helium atom; no, not the helium atom exactly, but the case of two hydrogen atoms far apart. I couldn't figure out why I kept getting "mini-helium" as a solution. So I backtracked to the simpler case of two potential wells. I thought that would help.

Then I realized I didn't know how to do even ONE potential well if it had a second electron in it. So I started playing around.

First I said, what if the two electrons make some minimal effort to stat away from each other. You know that the ground state is a sine wave, so I added a little “second harmonic” to each one. Something like so:
<!--[if !vml]--> 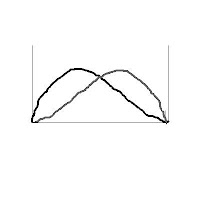 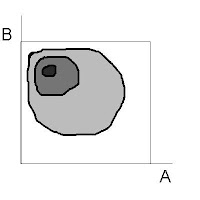 The next step is a little interesting. In quantum mechanics you're not allowed to have a wave function that distinguishes in any meaningful way between two electrons. If you have A here and B there, you have to say that it's just as likely that B is here and A is there. So the function I've drawn is technically illegal. There is a way to make it right however, and it's called symmetrization. You just reverse A and B to get a new function. (It will look the same except the blob will be in the lower left corner instead of the upper right. Then you just add the two functions together. That way, the roles of A and B are automatically interchangeable: 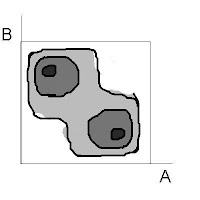 And that's it: that's the hypothetical wave function for the two-electron well, chosen so that the electrons make some effort to stay away from each other, and symmetrized to comply with the requirement that the electrons are fundamentally indistinguishable.

It turns out there is another different way to symmetrize our wave function, but I'm going to have to wait til my next post to talk about that...

You know, this is a pretty good article but I can't believe it continues to get more hits than anything else I've ever posted. The irony is I left out something really important that I didn't notice for almost a year. I've redone the analysis here:
http://marty-green.blogspot.com/2011/04/two-electron-well-revisited.html
and I hope if you're following this, you'll check out my updated version.