Let's do the math

I promised I would do this calculation, and here goes. That is, I’m going to walk through the steps of the calculation and let you fill in the blanks.These spinor affairs can be really confusing, and ultimately no one can lead you through it unless you’re really motivated to do it yourself. So what I’m going to give you really amounts to a series of signposts along the way to check yourself against. Good luck.


First lets remember what we’re doing: we have a pencil beam of silver atoms going through a Stern Gerlach magnet, and we’ve proposed…proposed?...no, I’d say we’ve erstablished that it spreads itself out into a donut pattern, not the two dots that everyone talks about. I’ve presented what I said is the only logical form that the amplitude function can take for a polarized beam going through the field spin-up. You’ll see that although the silver atoms started out with their spins all supposedly pointing up, when they hit the screen they have all different spins, depending on where they hit the screen. I’ve already shown the picture, so for now let’s just remember what the function looks like. Of course it’s a spinor function:

Now it’s a question of geometry as to what the distribution on the screen should look like if you start with your beam of atoms polarized the other way, spin down. This is the first “signpost” I’m giving you to check that you’re doing the calculation right. If you transform your geometry correctly, your function should look like this:

I’m not going to pretend to explain why it should look like this: that’s the kind of thing you can only do for yourself by working out the geometry with pencil and paper, according to whatever methods you are comfortable with. I’m just saying, this is the answer you should get. Like I said: it’s a signpost.
Again, let’s remember where we’re going with this. We now have the ring patterns for the two special cases, spin-up and spin-down. In theory, any arbitrary case can now be analyzed as a superposition of these two cases. What we want to consider is the special case of the spin-sideways beam. From the geometry of the quadrupole field, we know that for the sideways beam, we should get the same deposition pattern of silver atoms as our initial case, except it must be rotated 90 degrees. So let’s do the math.


We know how to make spin-left out of our basis states. Its just (neglecting the scale factor) spin-up plus spin-down.  Or maybe its spin-up minus spin-down. It doesn’t really matter, because either way the pattern is rotated by 90 degrees.
Except I’ve worked out this case already and it gives me a uniform distribution pattern around the ring. It turns out that with respect to the axis of propagation, what we’ve actually done here is the case of spin-forward and spin-backward. There’s always that element of ambiguity in spinor algebra, where you don’t quite know where your phase is calibrated to. It turns out that in this case our spin-left/right cases should have actually been the complex combinations: 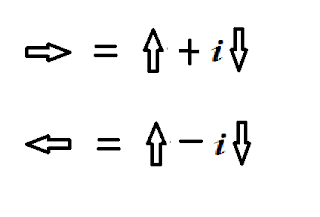 These are the spinors we want to analyze. In fact, we’ll just do the first one, because it comes to the same thing. As go the spinors, so go their deposition patterns. So to find the composite sideways deposition pattern, we just have to put phi(up) for the up-arrows and phi(dn) for the down arrows, and then add them together component-wise. The answer should look like this:

We’re really almost there, but how to verify that this function is just a rotated version of our initial function? It doesn’t look exactly right, but you know how it is with complex phases and things. Looks can be deceptive. But that’s because we’re dealing with amplitude functions. There is no confusion with phases if we convert to a denstity function. So let’s see what happens.
Last time we did this, we worked out the intensity pattern for the case of the unpolarized beam…remember how it went?...square first, then sum. This time it’s the opposite. For the coherent superposition, we’ve already summed first, and now we square! It’s not that hard to see that the intensity goes as 2 + 2sin(theta). That’s actually double our initial function, but remember, we haven’t been bothering to keep track of our scale factors. The main thing to see is that the pattern is rotated 90 degrees…just as the doctor ordered!


Now you know what the Stern-Gerlach apparatus really does to a beam of silver atom, and don’t let anyone tell you differently.
Posted by Marty Green at 8:56 AM