It’s taken a while but I’ve laid out all the machinery for analyzing the case of the silver atom entering the magnetic field tilted sideways. Here is how it goes.
1. The atoms precess in the magnetic field. The ones higher up precess faster.
2.  Because of the differential rates of precession, when they leave the magnetic field the spin orientations form aa corkscrew pattern across the cross-section of the beam.


3. Now break the corkscrew into up and down components and analyze the output as a diffraction pattern.
For purposes of calcualtion we can take the precession to be zero in the center of the beam. From basic spinor algebra, we know that the spin-up component will vary as the cosine of the distance from the center; likewise, the spin-down component will vary as the sine. Here is a map of the spin components across the cross-section: 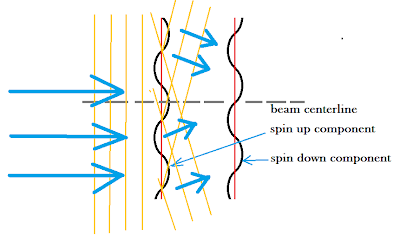 Of course, I’ve taken my “up/down” orientation to be aligned with the spin of the atoms. So what I’m calling “spin-up”, the original orientation of the atoms, is actually spin-sideways to the magnetic field. It’s easy to analzye if I take my spin basis to line up with the magnet…I did that last week. The interesting thing is how it works if I take the alternate spin basis, and that’s what we’re about to see.


From everything we’ve gone over in the last week, it should now be obvious that the beam splits in two. The spin-up component splits in two, and the spin-down component splits in two. From the incoming beam, we get two outgoing beams.
What can we say about the spins of the two outgoing beams? They appear to be made up of equal portions of spin-up and spin down. But look carefully at the relative phases of the two components. They are out by 90 degrees, and they are out in opposite directions! In one beam the spin-down is 90 degrees behind the spin-up, and in the other beam it is 90 degrees ahead.


I’m not going to go back and derive all of spinor algebra from scratch, but if you know anything about spinors you can see that these two beams have their spins alignede in opposite directions. In fact, one is spin-up relative to the Stern-Gerlach magnet and the other is spin-down. It’s the same result we got when we analzyed it in the spin-basis parallel to the Stern-Gerlach field, but now you can actually see how it works with precesssion and recombination.
The next problem on my agenda is the one proposed five years ago by Brigham Young grad student Jared Rees Stenson: the splitting of the beam in a pure quadrupole field. I wonder how that’s going to look.