This morning I started a long and perhaps pointless calculation to figure out the radiation losses when two electrons collide. I took as an example the case of two electrons colliding head on with an initial velocity of 10^6 m/sec each, and rebounding exactly the way they came. I drew a graph of the collision, and got values for the acceleration and time: namely, an acceleration of 4x10^21 m/sec^2, and a collision time of 5 x 10^(-16) sec. Putting these into the Larmor Formula (you can check the numbers yourself) I get a total power of 4.5 x 10^(-28) joules, of about one part in 10^7 of the initial energy of each electron. 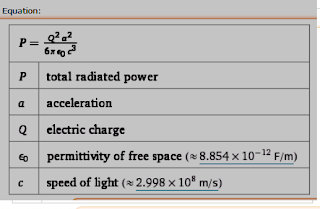 This isn’t all that surprising after all. The electron energy is typical for atomic electrons, and the sharpness of spectral linewidths is typically on the order of 10^7. The proximities, the forces, and the charges are all the same as we deal with in spectroscopy, except that we have only one-half of one cycle of oscillation. So the energy radiated is about what it should be.

But remember, this does not give us the correct answer for the radiative losses for the overall collision. That’s because the accelerations of the two electrons are almost mirror images of each other, so the radiation pattern of one is almost entirely cancelled out by the other. I want to deal with the question of: just how much is the residue?

A lot of first-year physics students notice something funny about the formulas for acoustic power: if you have two sources one on top of the other, the amplitude of the wave doubles, so you get four times as much power. The other side of the coin is that for oppositie amplitudes, you get zero power. If this doesn’t bother you when you first encounter it, well…it ought to.

The paradox starts to make sense when you look at the effect of proximity of the two sources. If they are close enough to be coherent, you do indeed get these interference effects. But once the separation of the sources becomes on the order of one wavelength, the effect disappears. Oh, you can still have constructive interference…but only in selected directions. In other directions, you get destructive interference; and mostly, you get random degrees of interference, positive and negative. It averages out so the power of the two sources adds up to just the sum of the independent sources.

The case we are dealing with here is two sources of opposite phase which are very close to each other. It’s pretty hard to do the exact calculation, but it’s not so hard to get a pretty good idea of how the interference works. If we take the nominal power to be just the sum of the independent powers of the two sources, the actual power has to equal the nominal power for anything over one wavelength of separation, and it has to go to zero as the separation narrows below one wavelength. We can draw a graph of this: 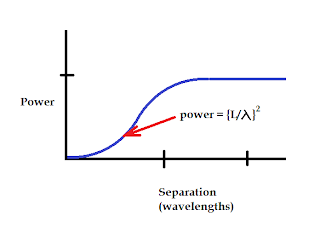 It’s not too hard to believe that for short separations, that is, the quadrupole approximation, the power is proportional to the square of the separation. What does that mean for our present example? Well, we had a half-cycle time of 500 micro-picoseconds, which corresponds to a wavelength of 300 nano-meters; with an “antenna length” of close to 300 picometers, this gives us a factor of 10^6 when we square the ratio. So the quadrupole combination radiates a million times more weakly than the independent electrons. Since we calculated a “naïve” power loss of 10^(-7), the realistic power loss, taking into account the quadrupole effect, is only one part in 10^13.

Do the losses ever become appreciable? We are dealing in the present case with speeds on the order of 1% of the speed of light. The dimensions of the radiating source are of a similar ratio as compared to the wavelengths of the emitted radiation. The radiated power actually increases rapidly with energy, becomes significant, not surprisingly, when the speeds become relativistic and the geometry of the radiating system becomes a large fraction of the wavelength.
At least that’s how it works for the classical case of charged billiard balls. The sad fact is, with all the calculations, I still don’t know what to make of the quantum mechanical case.
Posted by Marty Green at 1:50 PM