It's almost five years since I posted my original article on Quantum Siphoning and I think it's time for a second look. The idea is to explain the collapse of the wave function by means of normal time evolution. Specifically, how does the very weak "wave function" of the light from a distant star induce the reduction of silver bromide ("collapse of the wavefunction") on a photographic plate?

The traditional explanation is that this phenomenon proves the existence of photons, because the energy of the wave has to be concentrated in a point in order to provide:

a) the positive energy needed to account for the energy difference between silver bromide and metallic silver; and,

b) the additional energy needed to overcome the "bump" of promoting an electron into the conduction band. 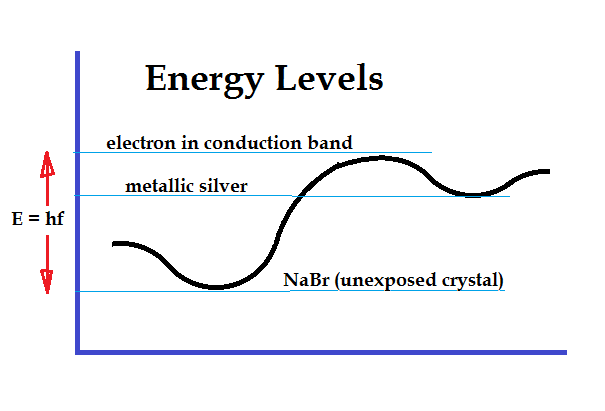 And they say you can't explain this with classical electromagnetism because the classical wave is far to weak to concentrate enough energy in that one little silver atom. Hence the photon.

I don't buy it. The first problem with this argument is that the thermodynamics is flawed. The photographic plate is not a device which captures energy and converts it to chemical form. The energy is already present in the plate in chemical form. Yes, it's true that the standard enthalpy of metallic silver is greater than that of silver bromide. But to calculate the spontaneity of the reaction you need to take into account the concentrations. The silver concentrations in an exposed photographic plate are parts per trillion. At those concentrations, the free energy of the reactions actually tilts the other way! I've done the calculation here. You don't need the energy of the "photon" to drive the reaction. The energy is already available in the chemistry of the plate.

But what about the "activation energy"...the bump of energy needed to get the electron into the conduction band, the intermediate stage of the process? That's where Quantum Siphoning comes in. The energy released when the target silver atom gets reduced is pumped back into the crystal to break up the silver bromide bonds. But how can it do that?

I couldn't figure this out for the longest time because I was trapped in the paradigm of a single electron getting transferred from one site in the crystal to another. But that's not what electrons are. They aren't particles with their own distinct identities. They are a collective wave function with multiple excitations. Anyone who knows about quantum field theory knows this is true.You simply can't describe an atom with two electrons by saying "this electron is here and that one is there". They are both excitations of a single wave function.

And the funny thing is, the same is true on some level for the x-trillion silver atoms which are part of a single silver bromide crystal. You can't say that a photon comes along and knocks an electron out of a single silver atom. What you can say is that a wave passes through the crystal and disturbs the wave function of the whole crystal so it is driven, ever so slightly, into a superposition of states where there is some amplitude that "an electron" is in the conduction band.

This is where people have trouble understanding where I'm going next. And the reason they have trouble is the way quantum mechanics is taught, from a strictly Copenhagen perspective of particles and quantum leaps. Nobody tells them about the equally-valid Schroedinger picture of wave functions and time evolution, which gives exactly the same results for all kinds of ordinary things, including the black body spectrum, the photo-electric effect, and even the Compton effect. I explain the connection between the two pictures in a series of blogposts starting here.

What people don't understand is that everything an atom does in its interactions with ordinary thermal light can be understood by looking at the superpositions of states calculated by the Schroedinger equation, and applying the charge density interpretation to the resulting wave functions, instead of Copenhagen's "probability density". People don't know this!

But it's much worse than that. They certainly don't know the full implications of the wave function picture, as I've listed two paragraphs back. That is not so surprising. What is horrifying to me is that they don't even know the basic and obvious fact that is you take the superposition of the s and p states of a hydrogen atom, you get an oscillating charge density...in other words, and antenna.

They don't know this...and when I tell them, they don't believe it. Even though its an obvious consequence of the well-known solutions of the Schroedinger equation.

And if they don't believe that the Schroedinger equations gives you a hydrogen atom with an oscillating charge distribution, then how are they going to believe that the very same tiny oscillating charge behaves exactly like a classical antenna? That's the calculation I did in those articles I pointed out above, comparing the Copenhagen picture to the Schroedinger interpretation.

And yet there is nothing that should be terribly controversial about anything I have said so far in this article. It's certainly unfashionable to talk about charge densities instead of probabilities, but there is nothing objectively wrong with it. What is appalling to me is that it is so very unfashionable that educated physicists scoff at the very notion that applying Maxwell's equations to the charge density picture gives you correct quantum-mechanical results. But it most certainly does.

So how does all this apply to the photographic plate? It's really very simple. The trillion-or-so silver atoms in the silver bromide crystal are little receiving antennas. The presence of a very week electromagnetic wave drives them ever so slightly into the excited state. What state is that? It's a state where the conduction band is ever-so-slightly excited.

Now there is one particular silver atom which is the target site, the site which we hope to convert to metallic silver. The presence of charge density in the conduction band will naturally couple to this target atom. And this coupling turns that special site into...an antenna. Just like the trillion little silver bromide antennas...but with a difference. Those silver bromide sites were receiving antennas. This target silver atom is...a transmitting antenna. Just as an atom being driven from a lower energy state to a higher energy state functions as a receiving antenna, so does an atom capturing an electron from a higher energy state into a lower energy state function as a transmitting antenna. I explain how these things work in this blogpost about the Crystal Radio.

The very weak electromagnetic wave is gone. It disturbed the silver bromide crystal to a very tiny extent, leaving a small amount of energy distributed among the ground state (silver bromide) and the two other states...the conduction band and the reduced silver site. And the combination of those two states creates a tiny classical antenna...a transmitting antenna buried in the middle of that micro-crystal. And now Quantum Siphoning takes over.

There is no photon. There is no collapse of the wave function. There is nothing but the ordinary, natural time-evolution of the Schroedinger function, working together with Maxwell's equations.

It's a perfect classical siphon.
Posted by Marty Green at 10:31 AM

Thank you Mr Marty. I think your interpretation is the correct one.

Thanks, UFO. Get out there and talk it up then...

You got me thinking. I think the circulating charge of constant energy is more like an electromagnet than antenna.

With out resistence there is no power loss, no transmition, and no change in energy. Energy is conserverved with out resistance. Static enrgy stored in the magnetic field in steady state. I think 1/2*L*i^2, DC. There is no transmission. If you twist the loop into a figure eight the situation is the same.

Conservation of energy and power operate in the steady state, except for resistance. That is an other argument against transmision. And an argument for transmition when an electron changes energy, but not when it does not.

I think the transmission idea of a constant circulating charge/current is bunk.

Loop antennas are different than electro-magnets in that they are driven with alternating current (AC), produce EM waves, transmit energy, get energy from the circuit. Static fields can not propagate waves.

In conclusion, an electromagnet with ciculating current/charge does not transmit in the steady state. And, enrgy analysis might also give a better picture. This might be a better way to think of it and lead further? I think that transmission theory is a mistake and is contra to emperical evidence.

The history of great science is paved with experiment. I think the most useful science has experimental verification.

Can you think of and do an experiment? Proves your line of thinking and falsifies the others? The cheaper and easier the better.

1. Like Einstein's theory of the Photoelectric effect, Bohr's formula assumes that during a quantum jump a discrete amount of energy is radiated. However, unlike Einstein, Bohr stuck to the classical Maxwell theory of the electromagnetic field. Quantization of the electromagnetic field was explained by the discreteness of the atomic energy levels; Bohr did not believe in the existence of photons."http://en.m.wikipedia.org/wiki/Bohr_model#Shell_model_of_the_atom

Right before the conclusion of-- http://www.the-phoney-photon.com/

I can't say that I understand his argument exactly but you might like the philisophical point he asserts.

Don't ask why the box barks, just mail it to the South Pole.

Isn't this tha same argument made by Lamb and Sculley in:

Quantum fields can explain the "work" done by photons that (in our mind's eye) push electrons around.

If the energy of the incoming wave is spread out and therefore small in the vicinity of the atom it finally interacts with, then how is energy conserved? i.e. where does all of the energy required to make the transition into the conduction band come from if not the incmoing wave?

You don't need to drive a whole electron into the conduction band. You only need to partially excite the mode within that band, to an extent of 1% or even less. Then the siphon effect takes over.

I've posted this Q with you in mind
http://physics.stackexchange.com/questions/185926/single-photon-electron-double-slit-experiment-resetting-the-detector-material-a?noredirect=1#comment392726_185926

I just came across your blog on my 'quest' to understand something about quantum mechanics and, in particular, the double slit experiment. You seem to come at the subject from the prospective of a 'radio guy' which resonates perfectly with my prospective as well. When I was a kid (1950s) I did build a crystal radio and used it to listen to the local AM radio station late at night when my parents probably thought I was sleeping. I was always fascinated by the prospect of extracting sounds out of thin air. Now I'm a retired engineer and have been trying to understand the crazy world of quantum mechanics. It did occur to me a long time ago that maybe there is a limit to how much energy you can extract from a EM wave. If a transmitter is radiating 1 watt then the total amount of energy that can be extracted by receivers is the same. Now as a practical matter it doesn't matter much with a radio transmitter, but it probably does with an electron or proton. I would think that any detector in a double slit experiment would use most of the available energy and would, for sure, alter the outcome of the experiment if it is applied at one of the slits. No wonder the interference pattern collapses. It seems that a lot of what I'm seeing on the internet regarding quantum physics is misleading and this had me going off in the wrong direction in my quest for some understanding.

If you are still considering this:

"The idea is to explain the collapse of the wave function by means of normal time evolution."