From my Jewish Post series: this one got published last fall. I think it's a really good article.

You’d see him around campus, sometimes striding purposefully into the faculty building, sometimes just standing there in the student lounge, but always alone. He had those thick coke-bottle eyeglasses and a penchant for long black trenchcoats. He wasn’t a student and he wasn’t a exactly a professor either, but they still gave him his own office. He certainly earned his keep in terms of research and publications…but a faculty appointment? Not likely. Much as they respected or even were intimidated by his intellect, he somehow didn’t quite fit in. Not that he would have really fit in anywhere else…
Generations of former U of M student surely know who I’m talking about, even if they don’t know him by name, and didn’t know his story. Except…there are two of them…one in Law, and one in Mathematics. They are Eddy Lipsett and Barry Wolk, and they are Jewish Geniuses of a certain unmistakeable type. Perhaps on occasion the Christian world produces its own Eddys and Barrys, but if so, I haven’t met them yet.

I hope both of them will forgive me for exaggerating the similarities between them, which I confess to having done for dramatic purposes. Of course they are really two very different people, with their own individual stories that I don’t really know much about, nor do I have their permission to tell, so I’m not going to say much more about them. But if it’s not too presumptuous of me, I’ve always felt a kind of cosmic connection to them, almost as though we three are part of what Lionel Boyd Johnson famously called a karass. Or perhaps I’m mistaken and I’ve simply identified a grandfalloon…who knows? (If you don’t know what I’m talking about, I suggest you google the religion of Bokonism.)
I’ve known Barry longer than I’ve known Eddy, because my involvement with math goes back a lot farther than my involvement with the Law. He once gave a lecture that I attended on something called the Nine Point Circle, a seemingly classical result of the ancient Greeks except for the surprising fact that it wasn’t actually discovered until 1822. Barry’s talk was a tour de force in which he proved the existence of the circle in three very different ways. It never occurred to me until this moment, but what a shame that I never invited him on my TV show, because then I could be posting him on YouTube. As they say, it’s the world’s loss. 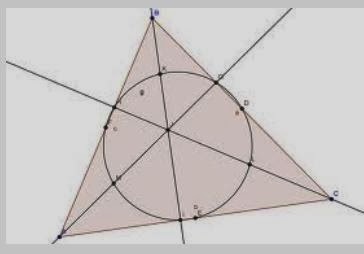 I run into Barry nowadays at the downtown library, where I often go to meet my own private students. Last month we were trying to show that for any quadrilateral inscribed in a circle, the angles add up to 360 degrees. We started by putting four points around the circumference and connecting them with straight lines. It wasn’t too hard to show that the angles had to add up to 360. But Kyle (my student) wasn’t quite satisfied. “What if you just know that the four angles add up to 360…how do you prove that the points lie on a circle?” I told him it was the same proof…you just go through the steps in reverse order…”like so”, I began…but then I found it wasn’t so easy!

We sweated over this for at least 20 minutes before we got it right; and then we saw Barry passing by, on the way to the free Internet terminals. He was already online when we caught up with him, coke-bottle glasses on the table beside him and his face six inches from a screen covered in equations. “Barry”, I interrupted him, “have a look at this, will you?” I showed him what we had been working on, and Barry was like,”oh, it’s trivial…trivial”. “No”, I tried to explain,  “we got the “if” part right away…it’s the “only if” that gave us a hard time…”

“Of course you can’t just reverse the steps” he jumped in. “You have to do it differently…here, give me a piece of paper.” And in seconds he had drawn the proof. A vintage Barry Wolk moment.

I only got to know Eddy in the last year or so, since legal research has become a bit of a hobby with me. Eddy is a much more private person than Barry, and I don’t want to pretend to be on any level of intimacy with him, but I saw him just the other day. It was early in the morning and he was on his way to shakhris. I asked him how his research was going…did he have any interesting cases? Yes, he answered, in fact he had just published something on Whatcott v Saskatchewan, and he started to tell me where I could find the article.

I couldn’t believe my ears. “You’ve got to be kidding: I’m arguing Whatcott next week in Provincial Court!” It was true! I’m defending myself against trespassing charges brought against me by the U of W, and Whatcott is an anti-abortion activist who pleaded Freedom of Expression to successfully beat the rap for trespassing at the University of Calgary.

It turns out Eddy’s case was a little different. It was the same guy, different case. Whatcott had a number of cases in the past decade, all involving abortion protests, including trespassing at the U of Calgary, loitering at the U of Regina (he beat that one too), and something with the Saskatchewan Human Rights Commission. That last one was Eddy’s case.

Still, I had hoped that this incredible coincidence would have been enough to pique Eddy’s interest in my case and get him to open up. But I had no such luck. As I said, Eddy’s a very private person and has a strict rule against getting involved in actual personal cases. In the meantime, I had unwittingly followed Eddy into shul, and our conversation was interrupted by the khazen’s intonation of the familiar words: piskhu-li shaarey tzedek…Eddy was already praying, and the shammes was handing me a tallis. Oh my god…was that Eddy harmonizing so beautifully? I turned my head to look in the direction of the sound. No, my mistake..it was Rabbi Green, singing into his microphone. Eddy was just standing right below the speaker…

Pretty close that you're a karass - just remove the 'kar' and you're spot on.