Feynmann Gets It Wrong

I don't know if there's a better book on physics than The Feynmann Lectures (in three volumes). I can't begin to say how important and valuable those lectures are. And yet he gets one thing very wrong, and it's a very important thing. It's the two-slit experiment.

Actually, he also gets the Stern-Gerlach experiment wrong in quite a fundamental way; I talked about this a couple of years ago in this blogpost where I show that the beam can't split in two: it has to fan out in a donut pattern. But the other day I was working with a student on diffraction patterns, and I was pretty shocked when we flipped open Feynmann and found this picture: 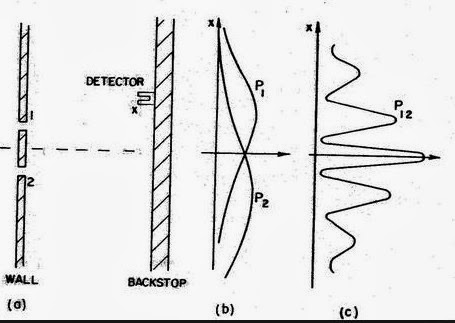 I wonder if you can see how wrong this is. It's not a little bit wrong. It's very wrong.

(EDIT Oct 2015: Actually it's not very wrong...it's a tiny bit wrong near the ends, but in the middle it's actually astonishingly accurate. I checked it with a ruler and the amplitudes line up really well. My mistake was to interpret the graphs as amplitudes instead of intensities. It's still a deceptive example in a way because it obscures the fact that you need a substantial overlap between the two patterns to get interference. Move those patterns any farther apart and the interference pattern disappears pretty quickly. But in this case, the graph is totally legit.

I'll leave the rest of my post undisturbed so people can see how wrong I was.)

The problem is in the (b) section, where he shows the intensity patterns you get from the slits taken independently...that is, with only one slit open at a time. He shows p1 and p2. If this is what you get with the slits open separately, then you cannot get the distribution  at (c) when you open both slits. It doesn't work. 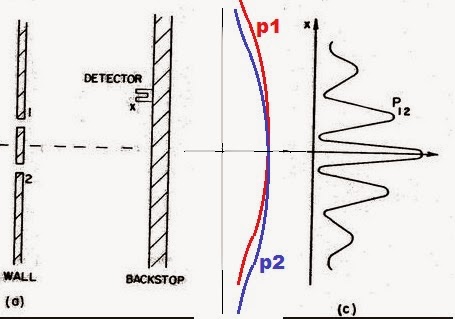 Do you see why this way makes sense, and the other way doesn't work?

If you think I'm nitpicking (and I don't think Feynman would have!) then you don't understand the two-slit experiment.

"... The other great heritage is Christian ethics — the basis of action on love, the brotherhood of all men, the value of the individual — the humility of the spirit."

You, Marty, obviously don't suffer from the humility of the spirit with your multiple frivolous, vexatious and absolutely ego-driven court cases, now do you.