Excel To The Rescue

We've been having some fun with cubic equations. The other day we figured out that the relations A^2-4=B, when applied transitively three times in a row, generates the roots of a cubic equation. The trick is that you have to find a starting point whereby, after three iterations, you get back to where you've started. You can see what is happening on this graph: 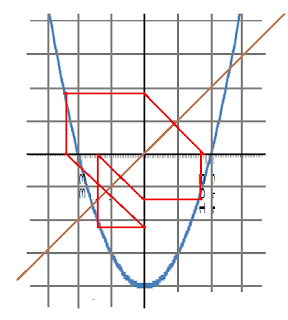 You can see that starting with A=1.6, we generate B= -1.4 and C= -2.4. Let's look at the elementary symmetric polynomials in A, B and C to see what our cubic equation should look like:

Now, if we remember what Balarka did the other day, he generated an octic equation by substituing the recursive relationship into itself three times, factored out the trivial quadratic, and then factored the resulting sextic into two terms, one of which was:

This is really close to the equations you get from my symmetric polynomials in A, B and C....considering I just drew those lines on the graph by eyeball (no cheating), I'm a bit amazed how well it worked. (Remember the signs alternate when you sub in the coefficients...I told Balarka he had a sign error yesterday, but I was wrong.)

It was actually quite a surprise when Balarka's octic factored cleanly. We had started with the recursive relationship A^2 - 2 = B....going through the same steps, generating the octic, factoring out the quadratic, and factoring the resulting sextic...well, we knew that one had to factor because there was already a known factor that was generated from combining the seventh roots of unity. But we didn't actually expect the arbitrary relationship A^2-4 to also factor.

So what about A^2-6? Well, I could have tried graphing it, but then I had a better idea...why not program the relationship into Excel? It's a super-easy spreadsheet calculation...you literally need only five or six cells. You just keep iterating your seed value until you get the recursion working. And of course, with instant correction, you can easily work it out to four or five decimal places. It's kind of fun.

I tried it first on A^2-4, and verified that the cycle did in fact exist...in fact, there were (of course) two cycles, corresponding to the two cubics that we factored out of the sextic. But how could we tell that these were the roots of a cubic equation in integer coefficients? That was easy! I just got Excel to display the values of the sums and products of the roots. At the sime time as the cyclic relationship converged back on itself, you could see the sums and products zeroing in on integer values. We had not only found the roots but also the cubic equation which they came from?

So what about A^2 - 6? (For some reason it seemed reasonable to stick to even values.) This one was different. I found the following triplets with cyclic relationships:

but checking the elementary symmetric combinations of these triplets, it was clear that they were not the roots of cubic equations with integer coefficients:

(These triplets came up as integers when we worked with A^2-4). But were the coefficients of the two cubic equations at least something like the roots of a quadratic? Indeed they were. Examining the pair of triplets listed above, you can see by taking sums and products that the coefficients are related as follows:

And that's about all I've got to say for now...

and after excluding the trivial roots by synthetic division, this reduces to the sextic

... which is not separable over integers anymore. And it has an unusual Galois group: the direct product of C9 and C2. (although admittedly I didn't calculate it by myself)

After further effort on GP, I found out that almost all such sextic that is not separable over Z[x] has Galois group C9xC2. In fact, the next n after 4 such that the sextic formed of the cyclic relationships of 3 roots xi^2 - n = x(i+1)^2 is not seperable over Z[x] is 8. Apparently it looks like the powers of 2 would work, but I found out I was fooled by the strong law of small numbers. It turned out the sequence is 2, 4, 8, 14, 22. Definitely something fishy is going around here. I think the latter wouldn't be hard to analyze but what about the Galois group problem?

Seems more than the eyes meet.

Careful...sometimes there can be less than meets the eye. I haven't thought about this carefully, but you're working a recursive relation that links A^2 not to B but to B^2. Just remember...if A, B and C are roots of a cubic, then A^2, B^2, and C^2 are also roots of a cubic, albeit a different one. (You can see it must be true because the symmetric polynomials in A^2 etc. are readily expressible in terms of the elementary symmetric polynomials.)

So are you finding equations in which the three roots differ by integers?? Or am I completely missing something?

Oops...you must have had two typos then. You meant to start with x1^2 -6, right? And then you meant that n=8 is the first one that IS separable, right?