For the last couple of months I've been distracted from the physics, so I've been filling time by republishing articles of mine that have previously appeared in the print edition of Winnipeg's Jewish Post. I've still got some more stacked up in the archives, and I do like having them up on the internet, but in the meantime I've written up some interesting stuff on the Fifth Degree Equation, a topic which you might remember from a year and a half ago. I think I'm going to put my new stuff up next week, so we'll be interrupting the Jewish theme at least temporarily. Until then, here's the last (for now) of my Jewish series.

Last week I left you with seven questions on Jewish culture that would have been child’s play for any kheder yingel in a typical shtetl of Old Russia. Here are the answers, as promised:

1.         What is the deal with the shor she-nagakh es ha-porah?
The case of “the ox who gores the neighbors cow” was an endless torment to the young Talmudist, who was expected to be able to explain the differing degrees of liability falling on the owner of the offending animal, depending on whether the beast was know to have a previous history of erratic behavior. I wasn’t there myself, but I’m guessing that more hours were spent arguing this question than any other single point of the law.

2.         What is the opposite of hayadayim yedey eysav?
“The hands are the hands of Esau, but the voice is the voice of Jacob”: ha-kol kol yaakov. These two catch-phrases came to express the dichotomy between violence and reason. During the Second Intifada, when two Israelis were lynched after straying into Ramallah, a chilling poster was widely circulated showing the famous picture of an Arab raising his bloody hands from a second-story window, over the caption: ha-yadayim yedey oslo. 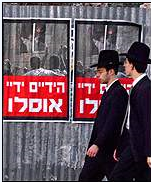 3.         What is the controversy over the beytzah she-noldah be-yom tov?
They say that the monks of the Middle Ages argued endlessly over how many angels can dance on the head of a pin, but it turns out we could do them one better. The question about what you are allowed to do with an egg that was laid (or was it hatched?) on the Sabbath was taken up by the maskilim as an archtypical example of rabbinical nitpicking. I actually can’t remember if the problem was the laying or the hatching; I just remember that when I asked Rabbi Weizmann, he answered (in all seriousness): “what difference does it make when it was _______?”

4.         What is the difference between a shtut milguf  and a shtut milbar?
The Talmudic tractate Tagrei Lod (The Merchants of Lydda) was named in honor of that city known for its mercernary business practises. One particular sore point for the Talmudist was knowing the difference between a markup or commission taken internally or externally, which couldn’t have been easy to calculate in Ancient Palestine prior to the invention of decimal notation.

5.         What is the solution to the problem of shnayim ukhzin be-talis?
Shnayim ukhzin be-talis…two men are arguing over a tallis; zeh omer ani matzati…this one says “I found it first”…the law says: yekhlukoh…it must be divided. No, not cut in half with a scissors like Solomon and the baby…just sold and the proceeds divided.

6.         Where would you apply the doctrine of kol dalim gevar?
In Talmudic Law, the adjudicator is permitted, in certain circumstances, to consider the vehemence with which the litigant argues his case in assessing the relative credibility of the parties. I guess as a legal principle this falls somewhere between “might makes right” and “the squeaky wheel gets the grease.”

And lastly, a bit of a trick question:

7.         Who was Baba Kama?
This question came up in the blood libel trial of Mendel Beyliss in 1912. Not everyone knows that Beyliss was defended by a “dream team” to rival the one later put together for OJ Simpson. These were mostly Christian lawyers, progressive-minded Russians who considered the accusations an embarrasment for their country. It happened that one of the chief witnesses for the prosecution was Catholic priest Justin Pranaitas who claimed to be an expert in the Talmud. Now, as every Jewish child knew, some of the books of the Talmud have names that sound like Ukrainian grandmothers: Baba Kama, Baba Metzia, Baba Bitra, etc. So on cross-examination, one of the Jewish lawyers on the dream team asked the Pranaitas if he could tell the Court who Baba Kama was. It is said that when the priest answered in all seriousness that he “did not know that person”, the mirth and hilarity among the Jewish spectators in the gallery knew no bounds.

As a final word, it ought to be remembered that Beyliss was ultimately acquitted by an all-Russian jury which included (if Wikipedia is to be believed) no less than seven members of the Black Hundreds! This not-insignificant detail was omitted from Bernard Melamed’s loose finctionalization “The Fixer” (1968). People who want to know the real story ought to ignore Melamed and hunt down a copy of Maurice Samuel’s “Blood Libel” (1966).