It's funny but the blogpost which has received the most hits in the last month was my article about transmission line impedances. I don't know why it hit a nerve with people but I guess it deserves a follow-up. Today I'm going to show you tricks for calculating impedances without knowing any formulas.

There is however one fact you need to know: the impedance of free space is 377 ohms. What does this even mean? It's a pretty deep philosophical question when you get right down to it, but in practical terms it can be answered rather easily. It means a freely propagatin electromagnetic wave whose magnetic field amplitude is 1 Amp/Meter will have an electric field amplitude of 377 volts/meter. It's as simple as that.

Of course it's far from simple, but that will have to do for now. Let's look at some implications.

The simplest transmission line we can calculate is the parallel strip line. Lets take to metal strips 100 meters wide (!) separated by a height of one meter. Let the electric and magnetic fields be as we declared above, and let the electric field be vertical (as it must be, since it has to be perpendicular to the metal sheets) and the magnetic field horizontal. Then the magnetic potential (field times distance) is 100 Amps and the electric potential is 377 volts. The impedance is just the quotient of these, or 3.77 ohms.

Of course, it's just the same if you dimension the strip in millimeters instead of meters. The impedance is really just a function of the shape and is independent of the actual size. It's actually helpful to think of the dimensions of impedance as being "ohms per square" rather than simply "ohms".

If we take the basic square as our working unit, we can see that the impedance of a strip line whose height is equal to its width should just be 377 ohms. In practise this turns out to be not true, because it doesn't take into account edge effects. But when the strip is very wide, as in our first example, the edge effects become negligible. The edge effect is also negligible in cases where the geometry wraps around upon itself so there are no edges. These are the cases we will look at, and our basic unit will be the square whose impedance is 377 ohms.

The first case of interest is the coaxial line, which looks like this: 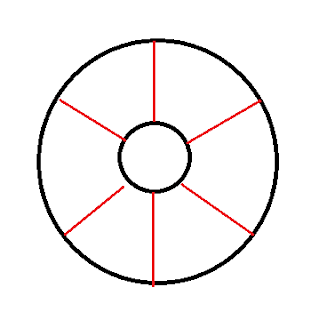 You can see that there are six "squares" in parallel with each other. (In this game we recognize a "square" as a quadrilateral which has been distorted according to certain intuitive rules.)  Since each square is 377 ohms, the total impedance is just 60 ohms. (Everyone knows how to do resistance in series and parallel, right?) In this case, of course, I have sketched the relative diameters of the cylinders so that six squares fit around the circle: really, it's pi squares (taking pi = 3 if you like) and the relative diameters of the cylinders are of course 2.718:1 which you recognize as "e".

The other interesting case is parallel wires. I'm going to take our first example as two wires of radius r whose centers are separated by a distance or 2r. I've drawn the squares in and it looks like this: 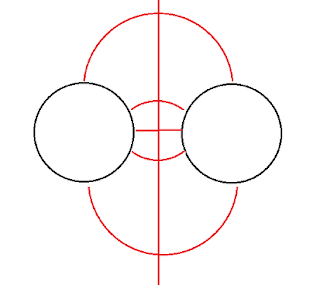 You can see how the squares line up in rows: there are for rows of two squares which easily gives an impedance of 377 x 2/4 = 190 ohms. Actually, that's wrong: there's a fifth row of squares which is the wrap-around that goes all the way behind and circles back! So we really have to multiply our unit impedance by 2/5, giving an answer of pretty close to 150 ohms. 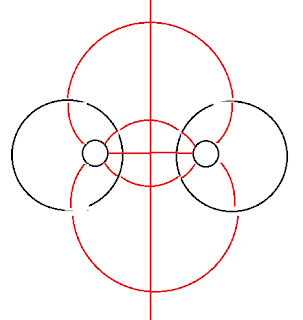 You can see I've just taken the previous diagram and shrunk the wires. Because the field is distorted, the shrunken wires don't move to the center of the original circles. You can see I've placed them so everywhere I've still got my 377-ohm unit squares. We can easily get the resistance just be adding the squares up. Remember we had an impedance of 150 ohms between the larger circles. You can see that there are 5 squares between the larger and smaller circles, so dividing that into 377 gives us an additional 75 ohms on each side. The total impedance is therefore 300 ohms.

You may remember that the original article I posted was in response to this discussion on StackExchange.com . The problem in question concerned a transmission line with a ratio of diameters D/d = 50. People who know all about formulas and things calculated the impedance as being 552 ohms. Let's see how close I get using my pictures. I've already got a value of 300 ohms for D/d = 4. That means within each circle I have to reduce my diameters by a further factor of 12.5. I already said for each factor of e I get another 60 ohms of impedance. Since 12.5 is approximately e^2.5, I get an additional 150 ohms on each side, bringing my total impedance to 600 ohms. That's an error of 48 ohms. Maybe its a little better if I actually calculate the natural logarithm of 12.5? Actually, it's just a bit worse: I get ln(12.5)=2.52, which is just a hair above my eyeball estimate. Still, I think its' pretty good on the whole.

There's more cool stuff you can do pictorially with impedances, including calculatint the radiation resistance of a half-wave dipole, but I'm going to leave that for another day.
Posted by Marty Green at 9:00 AM